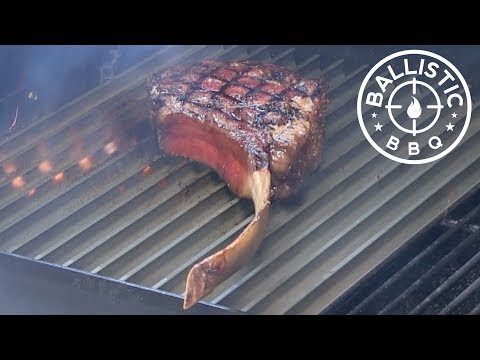 Thank you for stopping by Ballistic BBQ. On today’s video, I’m going to be cooking up a beautiful, gigantic Cowboy Cut Tomahawk Ribeye. Let’s get going.

And here is that beautiful steak. Three-and-a-half pounds of Prime Angus on a gigantic rib bone. This thing is awesome, comes from Matador Prime Beef, and I cannot wait to sink my teeth into this.

What I’m gonna do today is cook this low and slow, and I mean low. We’re going to be running the Yoder at 200 degrees. I’m going to cook this just very gently until it reaches 125 degrees, internal. Then, we’re going to sear it off on an extremely hot grill grate.

First thing I’m gonna do is season this. And this is a lot of beef here. It can handle some flavor. So on this cook I’m using that R Butts R Smokin’, our beef rub. And this is the same rub that I used on those beef ribs, not too long ago; actually, my last video.

I’m going to go ahead and apply a very thin coating of garlic-infused avocado oil. And avocado oil has a very, very high smoking point. You can smell that garlic. Again, a lot of meat here is gonna handle these extra flavors.

Now let’s get that rub on. And this is a very savory rub, with a lot of different herbs and a little bit heat.

Alright, I’m going to allow this rub to penetrate, allow it to sweat through. In the meantime, I’m going to go out in the backyard and get that Yoder set up. I’ll meet you guys out back.

As soon as you can see the upper grate is in place, this is where we are going to be going low and slow. Lower grates have been removed here. This is where the grill grates will be going eventually, when we do that really hot sear. Let’s go ahead and get that steak on.

And we are rolling. So again I’m going for 125°F internal on that steak. Once it hits about 80 degrees, I’m going to go ahead and flip it just to ensure that it gets a nice even cook. But where it’s at right now on that upper grate, it’s getting a nice, you know, nice even gentle, heat. See you guys in a bit.

Steak’s been on about 35 minutes, or so now, and it just hit 80 degrees. I’m going to go ahead and give it a turn.

We were at 1 hour and 35 minutes into this cook and we just hit that 125 degree mark. Let’s check out the steak.

Look at that. So what I’m gonna do now is go ahead and pull the probe. This thing is tender. Beautiful!

So I’m going to take the steak into the house, loosely pin it with foil, then I’m going to come back outside, show you guys how we’re going to set up this Yoder for searing.

Alright let’s set this thing up for some hot grilling.

So obviously, I’ve already removed the upper shelf. Now I have the two-piece diffuser plate, so I have this hatch door here that exposes that firebox. I’ll go ahead and pull this out. I’m just using one of my other barbecue tools here.

So as you can see now that firebox is exposed. And when I crank up the heat on the temperature control, the fire is going to get much larger because it’s going to be dumping a lot of pellets in there.

So the next thing we’re going to do is install the grill grates. So I’m just going to go and put these guys in.

These are tongue and groove, so it’s easier for me to just do it all at one time.

Alright, we got the door closed.

So the next thing we’re gonna do is adjust this damper. This is on the right side of the cooker as you face it and just push it in.

So I’ll show you what I just did. Now, I would have to actually remove the diffuser plate in order for you to see the damper, but basically, you can push it, you know, towards the firebox. So what I did was push it all the way to basically the edge of the grill grates here. And that’s going to concentrate the heat down below those grill grates and make it much more intense.

So, the next thing we’re going to do is increase the heat. So I’m going to set for 200. We’re gonna crank this baby up.

So I got this thing cranked up to 600 degrees now. Those grill grates are gonna be absolutely screaming. Soon as this thing’s all heated up, I’ll bring that steak out, we’ll finish it off.

Okay, we are ready to go. Because the pit was already running, it didn’t take too long to get it up to this grilling temp. This thing is raging.

And just a few minutes ago, you see, yeah, 591, actually just climbing up.

First thing I’m going to do is put on some cooking spray. This is just canola oil, basically.

And I’m going to let this sear about a minute on each side.

Give it a little turn here.

So, we’ll get this back in the house, let it rest a little bit, slice it up, give you guys a taste test.

Well, appearance-wise on the exterior, this thing is beautiful, just a beautiful, beautiful steak. Hopefully it looks as good on the inside. Let’s give this a try.

So, first thing I’m gonna do is just slice it in half so you guys can see what I just saw. That is what I call perfect, medium rare.

Now, what I’m going to do is just cut this into slices, and the nice manageable slices. And this will easily feed, you know, two people.

My wife’s off in the wings, salivating right now.

And then, what I would do, and just put it like this.

That is gorgeous. Okay, now for the tough part, I need to try this, like I would be failing in my job if I didn’t try this out. Look at that. That is so beautiful. Wow.

Wow. Now, that Yoder (offset smoker) rocked this cook, I mean, it grills, and I have not cooked on a pillar cooker that can grill like that. I mean, this amazes me.

Now the other thing that I wanna point out is I’ve really come down on my temperatures when it comes to the reverse searing thing.

I’ve brought them down to 200 now, and a lot of that has to do with my experience in sous-vide. It minimizes the carryover, just coming in at that lower temp. And you can see the results here, I mean, that is just a beautiful cross-section. It’s beautiful.

So happy with this cook! Wow.

Anyway guys, so people have been asking me to talk about beers I’m drinking. So this is from a very small craft brewery out here in San Diego County, in Alpine, California, it’s Alpine Beer Company, and this is their Truck Trail Pale Ale, and it’s named after, there’s a truck trail of famous truck to a low skyline truck trail, and that’s what it’s named after. But it’s a really good beer. Again, it is just a lot smoother than some of the really heavy IPAs.

Anyway, on that note, thank you for stopping by. Again, I’ll have links down below for Matador Meats, you ought to check them out. See you on the next video. Cheers!

Check Price Is it right for you? Read our Traeger review.
Best Barbecue Wood is a participant in the Amazon Services LLC Associates Program, an affiliate advertising program designed to provide a means for sites to earn advertising fees by advertising and linking to Amazon.com
24 Shares
Share
Pin24