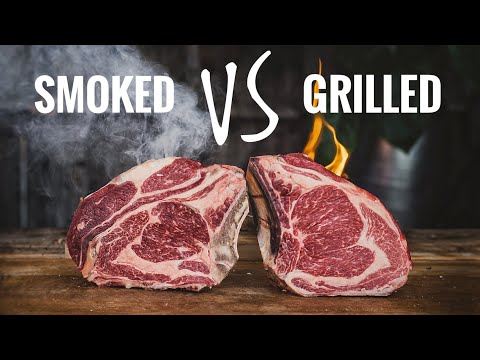 It’s been long time, Morrison. It’s been a long time since I said, “hey! The first thing that we’re going to do is fire up the barbecue.”

So, today, we’re gonna be cooking on a Kamado Joe Big Joe. It’s big. It’s time to put some charcoal in. I light up a fire starter and let it come up to temperature.

While a barbecue is coming up to temperature, I’m gonna tell you more about this experiment.

Long ago, we did an experiment with chuck roast. One chuck roast we smoked real barbecue-style, and the other one were seared off. To find out that you could do both at such an equal cut. But the question that I got from Morrison is, “can you do the same with a steak?”

So we started discussing back and forth, “can you do the little steak?” No, you can’t. It’s a steak. You have to sear it.

But, what if you have a highly marbled steak just like chuck roast, with a lot of fat in there and you render it down? Will it not become drying? Like, will, will sushi still be juicy and will it taste good? Will it be even better than a seared steak?

Of course, we wanted to find out, but not with a Wagyu steak. So we got the next best thing, which is Sashi steak from Denmark. It’s a classification; it’s not a breed of cow. But look at this steak, man. Look at the marbling of this. So, we’ve got one big fat, one, look at that. It’s three fingers thick.

And this one, it’s more like a roast size. So this one we’re going to do it low and slow until it’s fully cooked. And what I mean by fully cooked, all the way up to what you normally would do beef ribs. So we have proper barbecue steak.

To get a fair comparison, we’re gonna season them both with salt and pepper. So I’ll start with a little bit of olive oil, drizzle it on, and then rub it in, so that the steak and salt will steak to it perfectly. Now we’ll put our giant chunk onto our smoker, which we set to a temperature of a 110 °C. Look at that thing.

[Morrison] Will it fit?

Will it fit? It will fit, but it’s a good thing we’re using the Big Joe. It’s a giant.

Now, of course we need to add smoke wood to make sure we get that smoky barbecue flavor. We got a nice bit of smoke color. Look at this thing. Whoa!

So we got all the smoke color, but to prevent it from drying out, we wanna wrap it up in butcher’s paper.

[Morrison] It does look beautiful!

Although now, I totally it makes sense to smoke it.

Let it continue to cook until you reach a core temperature of 92 °C.

Our low and slow steak has reached the temperature of 93 °C. We’re going to take it off the grill, set it aside, and let it rest. This is almost nerve-racking. What if it went wrong? What if it’s gotten all tough and the fat ran it out, it’s no good anymore? Well, let it rest and now it’s time to sear our other steak.

There we go. This is a relatively smaller steak, so we’re just gonna sear it on both sides and then set it over indirect heat until we reach our desired core temperature of 54 °C.

Time to take it off the grill!

There we go. Look at this thing. It’s a beast.

Time to unpack our smoked steak!

The bones are falling clean off. Look at that. That’s what you’re looking for if you’re smoking beef ribs. But smoking steak? I’ve never done it before.

It almost sounds like sacrilege, but, man! I think this just might be a good thing. I’m gonna try a bit, Morrison. I can’t hold off any longer. Look at this. How good this is. This looks super amazing. Just a little bit. Come over here.

[Morrison laughs] Yeah, I think so.

Because, it was your idea, try it. And this is not one of the best parts. This is just a side piece.

[Morrison] Is it really good?

I’m gonna cut this in half because I wanna take a look inside and get a good comparison.

Now, the grilled steak, wow! Putting these things side by side, this is clearly a steak in a traditional sense, but here. This just looks like beef ribs, and it’s juicy. My first instinct says to go for these beef ribs and see what they’re like.

Take a big chunk of it, and boy, does it look good? Just wanna slice it up. Get some of those juices on there. And then just shred it up.

I’m so relieved, Morrison. This could have gone wrong very, very easily that we ended up with, uh, some kind of horribly dry steak, but if you compare it to beef ribs, I still prefer beef ribs.

Now let’s try some of that steak.

That is a really tasty steak, because the flavor of the steak is really strong and really powerful. Dry-aged, and a lot of beef flavor, a lot of strong, powerful. All of us like earthy tones, like a nutty, nutty flavor, really rich. You wanna try them, Morrison. There you go.

[Morrison] This is a pretty good steak.

[Morrison] I can still taste the same flavor.

Yeah. And that’s the funny part. It’s like, it’s kind of like messing with your mind, because normally, if you get beef ribs, it tastes completely different than what you were used to with a steak. But now, you get the same flavor on the steak as do you get on the beef ribs.

But of course, this is a crazy experiment. You would never do this to a proper steak. Cook it like this. But we just needed to find out if with the right amount of marbling, you, it could be done. And I can clearly tell you: it can be done.

But, if you know, you have to like, decide if you not rather have just beef ribs and instead of a crazy expensive steak. Did you already try this?

[Morrison mumbles in the background]

Sure? Are you sure?

No? There you go, brother.

[Morrison] It’s a bit tougher than a beef rib.

So look, Morrison. Look at that bird. This is gonna catch all the flies for us in the summer.

[Morrison] And now it’s shitting on your barbecue.

It’s a farm. What are you gonna do?

This was a fantastic experiment to do. If I’m being honest, I don’t recommend taking such an extremely expensive steak and then turning it into something that is so close to beef ribs. You also need that high amount of marbling and that’s just hard to find.

So if you wanna do something like this, just stick to beef ribs or take a chuck roast. It’s perfect for that purpose and it even gives a little bit of better results. So, just low and slow. It’s fun to do. It can be done. Morrison has proved it. His idea works. But I’m just gonna stick with steak, Morrison. If you’re okay with that?

So finish it up. And I just wanna say thank you guys for watching. You’ve been a great audience and all of the patrons and YouTube members. You guys freaking rock. Hope to see you guys next time.

Until then, smack a like and keep on grilling.