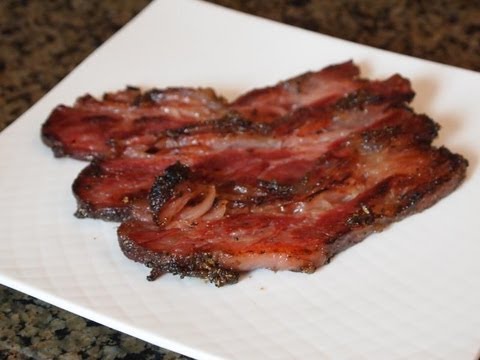 Hey, guys!  Thanks for stopping by ballistic BBQ. On this video I'm going to be making beef bacon, starting out with a cure and then we're going to end up with the smoking process. I'm also going to be using the Umai dry steak bags for the curing process, should be pretty interesting. Anyway let's get to cooking.

Get these all nice and mixed up. Once we have this completely, you know, mixed up, we're going to get on to the next step.

All right so the first thing I wanted to show you guys is the meat I'm using. I would rather use beef belly that wasn't available, it's a special order down here, so what I went with was beef short rib. Got a, you know, about a half a rack of beef short ribs and I just took the old handy dandy boning knife and separated the bonds, ended up with probably a good two pounds of meat. Now, the one thing I'm a little bit bummed about is, you know, there's that thin spot right here but I've also got some decent thickness here so I'll get some good slices out of this, especially once I get down this way, either way it's going to be really really good.

Let's go ahead and get this supplied with the curing salt. Just going to simply rub this like I would, you know, apply a rub on a, like a brisket. I want to make sure I get this thing thoroughly coated all right. Now once I get this again thoroughly coated with the rub or with the cure here, what I'm going to do is place it in a glass ,like a pyrex dish, put it in the fridge and what I want to see is this meat sweating out through the rub in order to use those the Umai bags effectively. They need to be a little bit, you know, kind of sticky on the surface of the meat for the bond be created so I'll get back to you after that's happened, after we've got the nice you know, kind of a sticky piece of meat. See you in a bit!

All right, so it's been about 48 minutes or so and as you can see it's sweated through which is what I wanted. Just so you know, what I did was, you know, I took a decent amount of the cure, laid it down on the bottom of this Pyrex, put the meat on top put the remainder on and just packed it in here really well. I don't know if I mentioned it though, without the bone on this I'm guessing this is probably, you know, a little over two pounds probably two and a half pounds or so, anyway let's get on to the next step.

All right guys so this is one of those the Umai dry aged steak bags you've seen Alan on the Grilling Network. You use a bunch of times pretty cool stuff and I'm kind of maybe going against the grain a little bit on how these are supposed to be used but I think because of the quality of allowing, you know, the gases and the moisture to leave inside of the bag but not letting anything into the bag, it's going to be perfect for like a bacon cure so it’s going to give us a go. I folded it back just to kind of help minimize, you know, getting moisture on the outside here and I'm just going to go ahead and put that meat inside, get it into the corner nice and tight and I can already tell I'm going to definitely be trimming this bag so let me get that trimmed up.

Bags been trimmed now as you can see the bag width is pretty much the same as the vacuum chamber on this food sealer so what I'm going to do is a few inches here, just going to seal that to make it ,you know, a little smaller. There we go.

Right now I'm going to get the little, what they call a vac Mouse. Okay so here's a vac Mouse that Umai sells. It's basically a pretty porous, like a membrane and it'll help, you know, with this vacuum sealer get a nice good vacuum on this bag, might be cutting it a little close with how far I sealed this but I think maybe we can do it too.

All right now we're going to put this in the vacuum machine. You want to make sure it goes over the heat bar and into the vacuum chamber here and as you can see it is sealing. Get all the arrow as we can, there we go, I'm pretty happy with this seal we got, all right check it out. Now what I'm going to do is place this on a wire rack, put it in the fridge for five days and, again, the nice thing about these Umai bags it's unlike you know the regular vacuum bags that come with like a food sealer is this actually allows the you know the gases and the moisture and everything to leave the inside of this bag. It's not going to let anything else get into the bags, kind of cool, kind of magic. After that, process is done. We'll get on with the smoking of this beef bacon, see you in a bit.

Alright guys so five days has passed, obviously it's out of the fridge now and we're going to go ahead and remove this, my bag here. Now it maintained, it actually bonded to this meat, really cool, so when I get this pulled off I'll get the meat out and we'll move on to the next step. And here we are, now going by texture, I would say we got a nice cure on this piece of meat. If there was any thicker than this I probably would have would another day or two but I think five days for this thickness was just about perfect. I said, you know, one thing I'm concerned about is how thin this is. I already know during the smoking process basically I'm going to put a little nice little section of jerky which is fine, which is fine.

All right it's been rinsed thoroughly patted dry now. What I'm going to do is add another rub on it for the cooking process. What I have here is some raw sugar, some turbinado sugar, some granulated garlic then this stuff here which is made by Knox Spice Company and it's cracked black pepper rub, good stuff. It's got a lot of really nice ingredients that you know go well with beef and I know a lot of people you don't have a problem with sweet on red meat but, I like it and again it's just going to be the edges of this beef bacon and it's going to add just a nice little sweet flavor and I'm going to apply this pretty liberally on here and I'm going to do both sides and the edges as well

And here we are guys, it's been thoroughly rubbed and once I put got it coated and I actually did rub it into the grains of the meat and everything. Got my pit preheated right now to 200 degrees so let's let's get out there and get this thing on some smoke.

All right guys so like I said pit is preheated to 200 and I am cooking on pecan. I'm looking at a cook time of probably 3 to 4 hours and I'm looking for a temperature, an internal temp on the meat of one-five-zero 150. See you it a bit.

Aright so bacon's done. It took a little under 4 hours, I went about 3 hours 15 minutes for this to hit 150. Anyway, let's get in the house and get it sliced up. Alright guys, here we are, it's all done. So what I did was I basically let this set and cool down in the kitchen and once it got cool enough I actually put it in the refrigerator to kind of set this well-let's slice a couple pieces of bacon here. Cut it from the front off first, now I know what you guys are thinking, that's raw Greg, actually that's not raw at all, this is fully cooked, just very cured so it's got that really dark dark pink red color but this I assure you this fully smoked bacon, take another more couple more slices here then we'll go ahead and give this a cook on the skillet yeah and again this reached 150 internal temp. I could eat this like this I mean again this is beef fully cooked, smoked. What I'm going to do now is I'll cook up a couple pieces in the skillet and we'll give it a try.

Here we are guys all cooked, look at that, basically what you're looking at, again it's a thin piece of meat very very smoked, I mean essentially these smoke rings actually met that's why it's got this deep red color, that and the cure but smells really really good. You don't mind if I you my fingers right, let's give this a shot.

Wow good a little bacon flavor, a little beef flavor, nice rich smokiness and I love that the sweet heat that you get on the outside with that rub I did. Anyway, my first experience using these, ooh my dry steak bags, I wanted to do something a little bit out of the norm I guess for these bags and I think there's going to be a good application for these making bacon. I'm going to try a pork belly doing this, it should work fine. There's, it's basically the same process but, anyway guys, thanks again for stopping by and I'll see you on the next video.