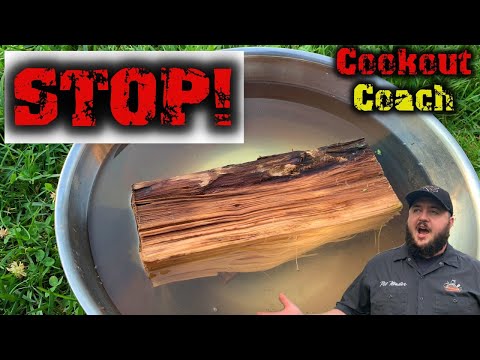 If for some reason, you’re wondering, “should I soak my smoking wood before I make barbecue?” You need to watch this video.

Hey guys. I am Steve from Cookout Coach. We’re all about trying to help you take your barbecue to the next level, no matter what you need. Today, we’re gonna be talking about is a huge myth that trips up newbies to smoking all the time.

If you ever had anybody tell you that, you need to stop taking advice from them, and come hang out over here with us more often.

So, look, from a practical standpoint, this is what’s going on. If you soaked a chunk of wood, a log of wood, I don’t care, chips, whatever you soak. When you put it on the fire, what’s happening? Just like if you put water in a frying pan, the first thing that has to happen as that chunk of to heat up, is you’ve got to eliminate all of that water. This is gonna produce steam, not smoke. Those same gurus are gonna tell you, “well, yeah, it’s gonna keep that wood from burning up faster, so it’s gonna be there longer and eventually you will generate more smoke.”

You got me there. Kind of.

Look, when a piece of wood goes to combust to generate the chemical compounds that you and I identify as delicious-tasting smoke on my barbecue, there’s a lot of other compounds that are released as well.

People that know what they’re talking about, you’ll hear them refer to this as the impurities, more commonly, the puffy white smoke that we’re all not supposed to get? You guessed it: it’s that beginning phase of combustion.

There’s a sweet spot of temperature range around combustion and post-combustion for wood that really burns off those impurities and releases the good compounds that tastes good to you and me.

Now, here’s the funner part. Anybody who’s told you to soak a wood chunk before you put it on the fire, they’ve clearly never done it and looked at what it does because that water doesn’t penetrate more than a couple of millimeters deep.

If you’ve been with the channel for long, you know that I hate to just talk about something that I assume is right or that I’ve heard is right. I like to witness the proof.

So, let’s go. Time to get some proof.

What we’ve got is a hickory mini log split. These are my go-to fuel sources when I’m running Char-Broil or Offset Pro. So naturally, I have several lying around. What we’re gonna do is take this hickory split, that’s nice and square, and we’re gonna soak it in the stainless steel bowl for two days.

If you’re gonna tell me two days, isn’t long enough to soak the wood, we can’t have a conversation anymore, friend. We’re done.

But for the sake of testing, two days later, here’s our hickory split. Looks fully-saturated, right?

A few seconds to work on the old miter saw, and boom! Dry as a bone inside. If I show this to you on the end, you can’t even tell it’s wet on the outside. And that was two days of soaking in water.

So, why did I make this video? Here’s the thing: every week, I see a new product designed to help you soak your wood or someone asked the question, “should I soak my wood?” Or I see a picture of someone who’s putting wood in a water bath on a gas grill, trying to get smoke that way.

Barbecue is easy. There are no tricks to making good barbecue. It is literally timing, bigger ash pile, put in the work, do the cooking, you’ll get better. It’s a simple art form and I’m here to help you do it to the best of our abilities.

But if some Joker is telling you to soak your wood before you smoke your ribs, you give me a call. We’ll have a talk with them. We’ll have a barbecue intervention.

Since people have been telling you how to incorrectly smoke wood with this wet wood, anyways, why don’t you come with me over here? We’re gonna have a little talk about how to produce the best-smoked barbecue. Come on.

Check Price Is it right for you? Read our Traeger review.
Best Barbecue Wood is a participant in the Amazon Services LLC Associates Program, an affiliate advertising program designed to provide a means for sites to earn advertising fees by advertising and linking to Amazon.com
5 Shares
Share
Pin5