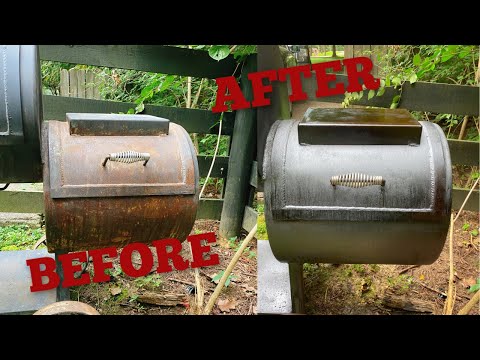 Hey guys! Welcome to Mad Scientist BBQ. I’m Jeremy Yoder, and today I’m gonna show you how to deal with rust on your smoker.

For all those of you out there who have offset smokers, you understand the struggle with rust. Because you’re cooking outdoors and your smoker is exposed to the elements, the metal is exposed to oxygen and water. And it will rust.

Now, I could go on a long rant. It’s not even a rant, really. I could go on a long discussion of the electrochemistry involved and how rust forms, but that’s not really gonna help you. What’s gonna help you is teaching you exactly how to deal with it. And I’ll show you how I do it and how you can easily prevent rust from accumulating on your smoker, with one simple step every time you cook.

When I got it back just before I moved back to Kentucky, the firebox was covered in rust. Yes, I’m looking at you, Dani. And, now I have to deal with it. But, fortunately, the way to deal with it is pretty darn easy.

Now, if you’ve got a lot of rust on the outside of your smoker, you’re gonna have to do more than just this. What I’m talking about for the everyday rust is starting to pop up, kind of wear and tear, just the rust that accumulates from general use. And the easy way to deal with that requires one tool. Boom!

If you just get cooking spray, it’s gonna make your life way easier.

Now, on my big smoker, sometimes I’ll just get a big spray bottle and I’ll fill it with a bunch of oil because there’s so much surface area, sometimes I have to go through more than one can, just to cover every exposed metal surface on the big smoker.

And sometimes, I don’t wanna do that or sometimes I don’t have this and as have big, big jug of cooking oil on hand to use for that purpose.

Now, if you do have in fact a lot of rust on the firebox, or on any part of the smoker, for that matter, you’re gonna have to actually get in there with an angle grinder and clean up some of that rust, because once you start having flaking rust, you have to make sure that you get in there to clean all that out so you can form a protective surface, and you don’t have spots that are gonna continue to rust under the coating of oil that you put on.

But, if that’s not the case, which for most of you it’s probably not the case, because at least for me, if I see rust starting to accumulate on my smoker, I start to freak out. And I think this needs immediate attention. Forget everything else, this has to be done right now.

And I’m guessing most of you guys are gonna be like that because you spend good money on your smoke because you don’t wanna see them ruined.

Now, really straightforward, these are the steps:

Get your cooking spray. You can use all kinds of different cooking spray. You can use regular pan. This is canola oil that I got at a Costco. You can use corn oil. Just basically any kind of oil you can put on there. I wouldn’t really recommend extra virgin olive oil just because it burns at a low temperature and the coating won’t be quite as good at least in my experience. But a canola oil works fine. You could use really anything you want. What I would say is get something cheap and in bulk. And so that’s exactly what we’ve got here today.

Step one: spray all the rusted surfaces with this oil. And you can even preventatively spray things that haven’t rusted.

Step two: is build a big fire. You wanna get it nice and hot, because what you want to happen is those molecules of the oil, you want them to polymerize, joint together, and form a coating, because that’s gonna protect from the water and from the oxygen of the outside environment.

And then the third step is cover the smoker and leave to barbecue another day.

And one final note about avoiding rust in your smoker: don’t put anything on your smoker besides the oil.

So, you don’t wanna, you know be spraying with apple cider vinegar, or you don’t want to leave ashes in the firebox because those things speed the rate at which the metal erodes.

And finally, I will say, if you have an offset smoker it is crucially important that you get thick metal for two reasons. Number one, is it will cook better and retain heat better, but also when you get this kind of surface rust, just superficial rust, it’s never going to be enough even over the course of twenty or thirty or fifty years to eat all the way through the metal. If you have something made out of sheet metal that will lose its integrity pretty quickly. If you just have, you know, several months of allowing it to rust.

So, thick metal is always key in having a smoker that’s gonna operate the way you want to for a lifetime.

Now that I’ve covered the entire outside surface with a generous coat of this cooking oil, it’s time to light the fire. Let it get nice and hot. And then we’ll check back in a few minutes.

Alright, and after a few minutes, we have a nice, dark exterior. The rust has been covered over. That oil has formed a coating around the outside, so think cast-iron skillet, the same thing you’re doing there is what’s happening here. So we’re protecting it from rusting and we’re going to protect the integrity of that firebox.

So, what I do, before every cook is I always wanna start with a good coal bed so I build a big fire, cover the outside with oil, and while that fire burns down, and forms the coal bed that I want to start with, I’m actually covering the exterior and forming another layer. And the more layers you put on the firebox, the better protected it is.

So it’s really easy. All you need is a spray can of oil and some wood to start a fire and you can prevent rust on the exterior surface of your firebox. Couldn’t really be any easier, and it does a phenomenal job.

Thank you for watching Mad Scientist BBQ. If you enjoyed the video, hit the like button down below. Subscribe to the channel and turn the notifications on so you get notified every time I put out a new video. And you can also follow me on Instagram and Twitter @madscientistbbq.

I’ll see you guys next time.

Check Price Is it right for you? Read our Traeger review.
Best Barbecue Wood is a participant in the Amazon Services LLC Associates Program, an affiliate advertising program designed to provide a means for sites to earn advertising fees by advertising and linking to Amazon.com
10 Shares
Share
Pin10